Before I completed my Everest base camp trek I had quite a few questions about the gear I need to take, crampons being one of them. So let me answer.

I understand why you would ask as I wanted to know myself before going. After having now been and experienced the base camp journey I know the terrain isn’t what you would use crampons for.

Why You Don’t Need Crampons For Everest Base Camp.

Nearly all the way up to base camp you are on worn paths or rocks but not any Icy surfaces.

Crampons are used for:

You won’t be in the situations that crampons are required. Good hiking boots or shoes with a good grip will be all you need to minimize any risk or slipping on the surfaces.

When I imagined the trek to base camp I pictured crossing icy glaciers and trekking through deep snow. In reality, it was not quite like that. It was more like rock and gravel.

That was on my trek through and every trek is different. You can most definitely encounter heavy snow on the way to base camp but the need for crampons is not needed.

As I said before, just good hiking boots with a good grip will be sufficient.

Is There Any Ice Or Snow On The Everest Base Camp Trek?

Yes and no. You will see plenty of mountain views which are covered in snow and you will sometimes get snow as you head higher up the base camp trail.

On my trek, I only had snow on the last few mornings before reaching base camp but it was only light snow. We had reasonably good weather all the way up.

I had a friend who did the trek about 6 months before me and he had plenty of snow and it was a lot colder.

At points though, my water bottle had ice in from just being inside my room in the tea house. But still, overall you probably won’t be trekking on heavy snow or ice.

The paths are usually just stony and gravelly without snow or ice.

On the last day when we left for base camp, I remember climbing over some big boulders.

Especially the last few hours before base camp there are some rough paths with big boulders to navigate but it’s pretty easy if you take your time.

What Kind Of Boots Are Needed For The Everest Base Camp Trek?

So if you don’t need crampons for the trek what kind of boots do you need for good grip? 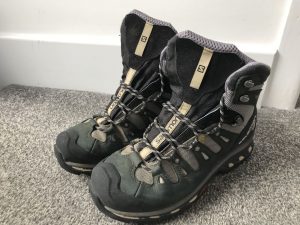 These griped the surface absolutely fine and rarely did I slip. They felt quite light which helps on long treks.

Something like those will be all you need for your feet to trek to Everest base camp.

As long as they good quality and durable then you’ll be fine.

You MUST wear your boots in though because if don’t you could get heal blisters which will cause considerable discomfort when walking 4-7 hours a day.

If you wear them in you’ll be fine.

I’ll only touch on this briefly as I go into more detail in my Everest base camp trek guide here.

Everest base camp is one of the most beautiful and picturesque places I’ve been to. It was very challenging due to the altitude.

Fitness wise I think most people can do it as long as they can walk over long periods of time. Most days you trek between 4-7 hours at a slow pace.

The altitude is what makes the trek hard.

If you take your time and drink plenty of water then you should be able to do it without any problems.

I even made the journey to basecamp as a smoker and with asthma! I know, it’s terrible I shouldn’t be smoking especially with Asthma, but I’ve finally quit now which is good.

The point is, if a smoking asthmatic can do it then I’m sure most people with just average fitness can do it.

So anyway I hope I’ve answered the question do you need crampons for Everest base camp.

I’m sure you’re excited about doing it, believe me, it will be an experience you’ll never forget and one which you’ll cherish forever.

Good luck and have fun!

Can Smokers Do The Mt Everest Base Camp Trek?

How Much Money Should You Take On Your Everest Base Camp Trek?