How Hard Is The Everest Base Camp Trek? My Personal Experience

If you are thinking about doing Everest base camp, then like me you’ve been googling all sorts of things including the difficulty of doing the base camp trek.

How hard is Everest base camp trek?

Everest base camp is moderately hard physically speaking, but the main difficulty is trekking with the lower oxygen level because of the altitude. If you’re able-bodied and you can walk for 4-8 hours a day then you should be able to complete the Everest base camp trek.

Everest base can also be hard for a number of other reasons which I’ll go into in this post.

Something I want to say though is even though the trek can have its challenges and at times you may struggle, I can honestly it is one of the best memories or my life and I’m sure it will be for you as well.

So What Are The Main Difficulties Of Doing The Everest Base Camp Trek?

So there are a few things that make this Everest base camp trek hard, physically but also mentally.

So physically speaking it’s hard because you need to be able to walk for long periods of time uphill.

Most days it feels like a gradual incline but some days it was literally steep steps and paths for 4-6 hours.

It was like doing the stair master for a whole day!

The good thing is though, you’re not in a rush so you can take it at a very slow pace.

In fact, I recommend you going as slow as you can. That way you’ll feel much better through the trek.

Difficulty Of Trekking At Altitude

This was without a doubt for me and most people the hardest part doing Everest base camp trek.

You just can’t truly prepare yourself for the altitude.

I know you can train with altitude masks on at home, but I don’t think it’s quite the same.

As you go up the mountain the air gets thinner and you have to go through an acclimatization process at each new height.

It a very odd feeling when you feel out of breath just from walking at a slow pace.

Even though it’s a bit strange sometimes, you eventually get used to it.

I felt night times were hardest at Everest base camp because I’d trekked all day up to a new height and my body was still acclimatizing.

I felt I usually woke up in the morning feeling pretty good and ready for the new day.

Next thing that can be hard getting used to on the trek is the accommodation.

The Accommodation Can Be Hard Getting Used To.

This was one of the mental difficulties.

We take our nice homes and nice beds for granted until we sleep in a tea house on Everest.

The higher up the mountain the more basic the accommodation became.

The main reason is that everything is carried up manually by porters and yaks.

Down the lower end of the mountain, it wasn’t too bad to be honest. It’s just the last 3 or 4 nights the accommodation felt like it was made of ply board and my bed felt like a slab of wood.

The rooms were cold and the toilets where terrible.

Some tea houses had western toilets but quite a few just had a squatting toilet which was hard getting used to. 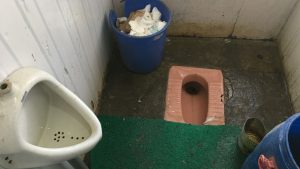 And if you want a shower then you have to pay and it could just be a bucket of warm water.

I know these things sound pretty tough, and they definitely do make the trek harder.

But the thing is, you get used to it. And the amazing experiences you do have on the trek make it all worthwhile.

Every night I enjoyed sitting in front of the yak poo fire (yep they use dried Yak poo for the fire) with a cup of hot chocolate connecting to other people on the base camp trek.

The views were out of this world! I couldn’t believe how stunning the scenery was at times.

So you really just have to take the bad with the good!

How To Get Prepared For Base Camp.

So obviously the first thing you want to prepare for is your fitness. If you are unfit then this will make the Everest base camp trek hard for you.

One of the guys with us did hardly any training and he struggled a lot, in the end, he got a helicopter back to Kathmandu from Namche Bazaar.

If you are carrying a bit of excess weight then it’s a good idea to try losing as much as you can before you go.

Focus less on building muscle and more on cardio training.

The best training, in my opinion, is just getting out and walking.

Find some long treks or walks close to your home and do them a few times a week.

I would do lots of walks and once a week I would do a 4-8 hour mega trek. I felt that got me prepared for those long days trekking on Everest.

So in regards to the mental aspect of being prepared, I would just say bring things with you that will help you pass time and give you some home comforts.

This includes bringing a kindle with lots of books on to read, adding some audio books and good music to your phone to listen to whilst you trek and when you’re having downtime at night.

Remember to bring a power pack so you can have back up charge if you can’t access electric to charge your phone.

Also, bring some chocolate/candy if you like that stuff (who doesn’t? 😀🍫) so you have something nice to snack on at night.

How Long Does It Take To Trek To Everest Base Camp?

The whole trek takes about 12 days from when you arrive at Lukla till when you get back to Lukla.

The places that you usually stop at are:

Some of those destinations you stay for 2 nights as you do acclimatization treks for the next stop.

This doesn’t include the time before or after when you’re in Kathmandu.

Something I would recommend is that if you are planning on heading home after your trek then book your flight back 2/3 days after you arrive in Kathmandu if possible.

The reason is the flights from Kathmandu to Lukla and vice-versa can only fly in perfect weather and sometimes you can spend all day at the airport and then get told you have to wait till the next day.

So if you book to fly back home the next day after your trek from Kathmandu then you need to hope your flight from Lukla to Kathmandu isn’t delayed.

If you have the extra day or 2 buffer then you should be ok if any delays happen.

Anyway, I hope this post answered how hard is Everest base camp. Now I have a few related questions you might be asking.

Has anyone died trekking to Everest base camp?

I know it’s morbid but some people do want to know.

Yes, some people have died attempting the Everest base camp trek but it’s very rare in comparison to the 40’000 people each year who make the trek.

Check out this post I did for more info on how dangerous the Everest base camp trek is.

Can you do base camp if you have asthma?

Yes, you can do Everest base camp if you have asthma. I have asthma and I had no problems. In fact, I felt my asthma was better because of the clean air on the mountain.

Can you do base camp if you smoke?

Yes, you can. Many people who trek to Everest base camp each year smoke. I smoked when I did the trek.

Obviously, it’s better to quit first if you can. But if like me you don’t quit before going, then as long as you’re still in good overall health then you should be fine doing the trek.

I did this post that you may find helpful on smoking and doing the Everest base camp trek.

Choosing The Best Sleeping Bag For Your Everest Base Camp Trek

10 Everest Base Camp Training Tips You Must Know