One of the main things I wanted to know before I did the Everest base camp trek is how dangerous it was, I know people have actually died doing it, but at the same time, people have died driving to the supermarket.

I’ve actually now been and made it back in one piece, so having experienced it first hand here’s what I think.

Is Everest Base Camp Trek dangerous?

Everest base camp trek is relatively safe with minimal deaths each year. The most dangerous aspect of the trip is the risk of acute altitude sickness. The other danger is having an underlying health condition when making the trek.

Roughly 40’000 make the trek each year and the death count is very low.

There are no real statistics on deaths that occur dues to trekking to Everest base camp but I estimate just a hand full of deaths happen each year and this is due to altitude sickness.

Everest Base Camp Deaths In 2015

The biggest death toll was in 2015 when 19 people were killed in an avalanche at base camp.

A massive earthquake happened at the Pumori mountain near Everest which caused an avalanche which killed 19 climbers.

Something to note here is that these were climbers who were attempting to summit Everest. They were further up from the base camp in which most people trek.

It’s actually very rare for people to die on the base camp trek.

The most dangerous part of the Everest base camp trek is getting altitude sickness. Altitude sickness is a very real danger when trekking at high altitude.

Helicopters were rescuing people daily when I was on the trek, and it’s nearly always altitude sickness related.

With oxygen levels as low as 50% at base camp there is some risk when doing the high altitude trek.

With that being said,

Don’t be discouraged as there are things you can do to minimize the risk of getting acute mountain sickness (AMS).

How To Reduce The Dangers Of Altitude Sickness.

So there are things you can do to reduce the chances of getting it or at least minimizing the effects of it.

The truth is, most people get some systems of altitude sickens. The main symptom being headaches.

Nearly everyone on my trip suffered from headaches at some point. That’s pretty normal and it usually goes once you’ve acclimatized to the new altitude.

I was very lucky not to get any symptoms. Out of 12 of us in our group, only 2 of us didn’t get some form of altitude sickness.

So what can reduce the risk of AMS?

This is so important, most people don’t drink much water at home so they think drinking 2 liters a day on the Everest trek is enough.

This is not the case when trekking for 4-8 hours a day at high altitude.

Even just a little dehydration will take its effect on you.

I drank 4-5 liters every day when on the trek (which was recommended by our guide). I was stopping for pees nonstop but it was worth doing.

On my trip, one guy got really bad altitude sickness and had to be airlifted down. He’s was just one day away from base camp.

I felt bad for him as he was so close.

Something I noticed though, is he drank a lot of soda, like Fanta and sprite but not much water.

And he was a big guy, I personally believe this had a part to play with this altitude sickness as he was suffering from AMS for most of the trip.

Make sure you drink 4-5 liters each day and you’ll be fully hydrated and your body will function better.

Next thing to do is:

Seriously, don’t be in a rush.

You’re on a beautiful mountain with probably the most wonderful scenery you’ll ever see.

Take your time and appreciate it.

In my group, everyone seemed to be trying to make it to the next stop as quick as they could.

It was like they were having a race, even though they wouldn’t admit it.

Me and another guy took our time, we were always at the back. And guess what, we never got any signs of altitude sickness.

You’re only going to sit around not doing much when you arrive at the next tea house for the night.

You might as well take your time and not push your body too hard.

The oxygen level is low so don’t make your heart pump harder than it needs to. Just walk at a very relaxed pace and you’ll feel better for it.

The last thing to consider is Diamox.

I personally didn’t take this as I heard the side effects feel similar to actually having altitude sickness.

Diamox is supposed to prevent altitude sickness and should be taken 24 hours before you reach altitude and then whilst at altitude.

You can buy it in Kathmandu and in some villages on the trek. It’s sold in most places so you won’t have an issue getting it.

Me and the other guy who didn’t get altitude sickness didn’t take Diamox, most others did.

So Diamox isn’t guaranteed to stop you getting it AMS.

I didn’t want to feel crappy by taking it so I didn’t use it. I had some as an emergency but I would be really hesitant to use it as I’ve heard people getting sick even when they take it.

It’s up to you, but make sure you follow my advice and drink plenty of water and take your time when walking.

Other Possible Dangers On The Everest Base Camp Trek.

These are the only 2 real dangers I would say you need to be careful about.

If you have a heart problem for example then that’s a serious condition that could effect you on the trip.

In this situation, you would need to speak to a doctor who has some experience with high altitude and see if they would give you the all clear to go.

This is down to you check with your doctors if you have any medical conditions you should be careful about before you make the trip.

This danger though is not really down to Everest itself.

It’s down to something you already had so make sure you get checked out thoroughly and get the all-clear before you make the trip.

If you do have a health condition and you are still going to do the trek then make sure you prepared and obviously insured.

This may sound silly but slipping up on the paths or as you climb some of the small rocks and boulders you are at risk of slipping and possibly injuring yourself.

The risk of death is low but hurting your self isn’t as low. 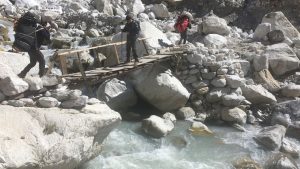 I don’t think this was the safest bridge 🙂

One of the guys in our group was trekking up the path and his walking pole snapped and he slipped up and hit his head quite hard.

He was alright in the end but you need to be cautious as you walk up the mountain paths.

The best thing to do which will decrease your chances of slipping is to have:

You have to remember you’re on your feet all day so you want to make sure your boots are good quality and have a good grip on the soles.

Having good walking poles if you’re using them is important, as my friend found out when his snapped on the second day.

I personally didn’t like using poles so I never used mine in the end but if you do use them make sure they are strong and can take your weight leaning on them. 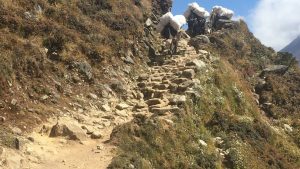 Sometimes the paths are narrow and rocky with steep edges.

How safe is the flight to Lukla airport?

Lukla airport has been named one of the most dangerous runways in the world. This is because of the short runway perched on the side of the mountain. There has been a few crashes throughout the years with the approx 26 Fatalities.

Something to note is the Civil Aviation Authority of Nepal sets high standards and only the most experienced pilots are allowed to land at the airports.

Here’s a pic of the airport from when we landed.

Can you get to Everest base camp without flying into Lukla airport?

Yes, you can do the original route which was taken before the airport was built and that is to catch a 7 hours bus from Kathmandu to Jiri where you then do a 6-day trek to Namche Bazaar where you carry on the route to Everest Basecamp.

What Is The Oxygen Level At Mount Everest Base Camp?

Choosing The Best Sleeping Bag For Your Everest Base Camp Trek