What Is The Oxygen Level At Mount Everest Base Camp?

Before I went I had tons of questions I wanted to know, one of them was about the level of oxygen on way up to Everest basecamp.

The main reason I wanted to know was that I had asthma and I thought I might struggle with the oxygen levels.

Your blood oxygen at that level of oxygen in the air will be about 75%.

In this article, I’ll tell you about the oxygen levels at the different stop up to base camp and how it feels to trek at that altitude.

So one thing that surprised me was how hard it was trekking with the lower oxygen levels. I knew it would be harder than normal but, it was much harder than I expected.

What Are The Oxygen Levels For Each Stop On The Everest Base Camp Trek?

These were the destinations that I stayed at along the way to base camp. Some places we stayed 2 nights so we could acclimatize.

As we went up you could definitely feel the impact of having less oxygen in the air. You do adjust to it though.

Each time we got to the next town I felt it was tough. But the next day I would feel fine and be ready to ascend to the next stop.

Here are the places we stayed plus the altitude and oxygen levels.

Lukla – This has an altitude of around 2860m with an oxygen level of 73%. This is the area you arrive of the plan from Kathmandu.

Phakding – The altitude here was approx 2610m with an oxygen level of 74%.

Namche Bazaar – The altitude here is 3440m with an oxygen level of 64%. This is where I started to feel the difference.

Dingboche – It gets a lot tougher here at 4410m altitude and an oxygen level of 58%.

Lobuche – This is the last stop before heading to base camp the next day. The altitude here is 4900m with 52% oxygen levels.

Everest Base camp – This is the goal. Basecamp is 5364m with just 50% oxygen. Trust me, you’ll be breathing heavy here.

When I was in Lobuche I took this picture that showed the oxygen levels from sea level to Everest summit. 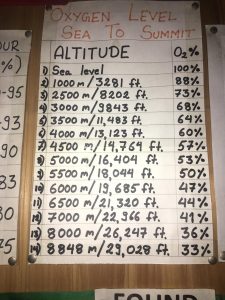 The one thing I don’t think you can fully prepare for is the lower levels of oxygen.

I know you can use an altitude mask when training at home but it’s not the same as walking all day at altitude and then sleeping at high altitude.

Because the oxygen levels are much lower up the mountain than at sea level you must walk at a very slow and relaxed pace.

Do not try to walk at your usual sea level pace.

If you do you could feel the effects of altitude sickness.

Something you may be thinking about is using oxygen tanks.

Do You Need Supplemental Oxygen For Everest Base Camp?

No, you do not need it to trek to Everest base camp. One of the guys with us bought a canister of oxygen with him in case he needed it.

The truth is, you’ll always feel like you could do with some extra oxygen but you’ll be fine without it.

Your tour guides should have oxygen with them though in case of an emergency, like someone getting acute mountain sickness (AMS).

It’s nice to know that your tour guide has oxygen tanks in case of an emergency. Just knowing that puts you at ease when you are feeling the effects of the acclimatization process.

I’m an asthmatic and I smoked (I know, don’t judge me) when I did the trek. Thank god I’ve quit now but I still managed it without needing any supplemental oxygen.

If you smoke you may want to read my post on smoking and the Everest basecamp trek.

Honestly, though, I don’t think I saw anyone using oxygen on the way to base camp.

Oxygen is usually for when you trying summit Mt Everest.

Is It Hard To Breath On The Everest Base Camp Trek?

So being truthful, it is a little bit hard at some points along the way. But you will acclimatize as you go.

Sometimes it can feel like you are taking big breaths and it’s not quite giving you the oxygen you need.

Don’t get me wrong, it doesn’t feel like you’re suffocating, but you can tell the oxygen is lower.

One of the main things you’ll notice is that you’ll feel much more out of breath from just simple walking.

On the day we left to get to base camp. I remember feeling out of breath just from walking at a slow pace.

You learn to deal with it though and just keep going.

The whole reason you have acclimatization days is to get your body used to the lower levels of oxygen.

At night time after a long days walk up to the next level of the mountain, I usually felt it the most. However, when I woke in the morning I always felt amazing.

Throughout the night I must have fully acclimatized and I felt good again.

Yes, one of the main reasons people get altitude sickness is the lower oxygen levels and lower air pressure the higher up mountains you go.

Most people will experience some mild signs of altitude sickness up the mountain.

What are Altitude sickness symptoms?

Here are some of the symptoms of altitude sickness.

Most people on my trip experienced some form of the above symptoms. Mostly just mild symptoms such as a headache that usually when after the acclimatization process.

There are some things that you can do to minimize the risk of getting mountain sickness.

How to prevent altitude sickness?

The first thing people consider is using Diamox, you have to start taking it 24hours before you reach altitude and then while you are at altitude.

The only problem is Diamox can make you feel terrible with symptoms similar to having altitude sickness.

I personally didn’t take any. Everyone in my group took it except for me and one other guy, and funny enough we were the only 2 who had no symptoms of altitude sickness.

One thing that will help prevent altitude sickness is walking super slow.

The other guy and I who didn’t get altitude sickness symptoms were the 2 always at the back of the group.

We always took our time and enjoyed the scenery on the way up.

The rest of the group seemed to compete with each other to get the next stop quickest.

The next thing which I think is super important is to drink plenty of water. I don’t mean 2 liters a day, I mean more like 5 liters a day.

The more hydrated you are the more your body functions at its optimum level.

Our tour guide said to drink about 4-5 liters a day so I did and I felt much better than most because of it.

You’ll be peeing like a racehorse but it’s worth doing.

There was one guy who always seemed to be drinking sodas like Coca Cola and Fanta instead of water and he was the one who suffered from altitude sickness the most.

He only made it to the Lobuche (the stop before base camp) before having to be airlifted and taken back to Kathmandu because of severe altitude sickness.

Moral of the story, take your time, drink plenty of water, and enjoy the scenery on the way up!

How Much Money Should You Take On Your Everest Base Camp Trek?

Thanks a lot for taking the time and write this extremely useful and elegant report. the best new advise for me was to take it slowly and enjoy the view. I think it is crucial and. It gives you more time for drinking. Thanks again. We are heading on the 1st of October to lukla for 14 days with two acclimation periods