Answered: Why Do Hiking Boots Have Red Laces?

So many people have red laces on their hiking boots. Maybe you have too. It’s a tradition, right?

If you’re like me, you probably have not thought too much about it.

Until now. And the question is killing you and you have to find an answer!

So, why do hiking boots have red laces?

It turns out that this question is next to impossible to definitively answer. I have scoured the internet looking for an answer to this question. It’s surprising the lack of information.

I guess I expected something obvious.

Like, for example, if you’re dead in the snow they can find your body easier because red stands out. (Sorry, I know that’s kind of morbid).

But it’s not that black and white.

So after investigating, reading forums, and poking around in the farthest reaches of the world wide web, this is what I have figured out.

Red Shoe Laces Are Symbolic, But Not Necessarily For Hikers

I was really surprised to learn that red shoelaces are actually symbolic for skin-heads.

This was shocking to me, because I have always associated them with my favorite hiking boots.

It turns out, in the white-power and skin-head movements, red laces can be interpreted as a symbol of status and beliefs.

The skinhead subculture, starting in the late ’70s and into the ’80s, underwent a political and cultural shift.

Skinheads are a subculture that identifies with certain types of music, fashion, and working-class values and politics.

During the political shift in the ’70s and ’80s the subculture divided along far-left and far-right political lines.

The extreme right is neo-nazis and racist. They are white power believers. Back then, some of them decided to use red and white shoelaces as an identifying symbol of their beliefs.

The “rules” about using red, or sometimes white laces, varied from place to place and group to group.

Luckily, these days, even amongst modern punk and skinhead circles, few people pay attention to the color of shoelaces.

So have no worries, you most likely won’t be mistaken for a racist skinhead if your hiking boots have red laces. 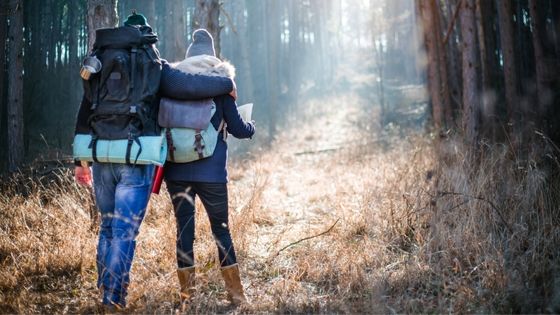 First, let’s look at the history of hiking and hiking boots.

In the US, hiking, as a recreational activity, started to take off in popular culture starting in the late 1800s. In the US, many folks were trying to get out of polluted and overpopulated cities.

In Europe, walking in nature for the simple pleasure of doing so goes back a little further.

In the late 1700s, an English priest published a book encouraging tourists to enjoy the aesthetic pleasure of nature. This set of an early trend of people going outside for the joy of it.

In both the old world and the new, hiking and extended outdoor excursions became more and more popular over time.

By the early 1900s, there was a whole movement underway to explore the great outdoors.

Back then, people ventured into nature with all leather boots or shoes. For traction, they would hammer nails through the soles of their boots!

By the 1930s, certain innovators saw an opportunity to create a more functional boot for the working man and outdoor enthusiast.

Among their ranks are the makers of the first textured rubber sole, Vitale Bramani – the creator of Vibram.

Then came the invention of synthetic materials in the ’60s and Goretex in the ’70s. Lots of different companies started to spring up, offering an incredible variety of options and styles.

As hiking boots evolved, so did the hiking culture.

In all cultures and subcultures, people dress, talk and use certain tools as a way to signal to others that they belong to the specific culture.

This tendency has a fancy name in the world of sociology – its called “Semiotics of Dress.” (Remember the skinheads? The red laces are an example of this).

As hiking and hiking culture gained popularity, using certain clothing and gear became symbols that you belonged to the subculture.

Using certain items proved you were “in” or “in the know”. Hiking boots were no exception. Like other gear, hiking boots signaled to everyone else on and off the trail exactly what club you were in.

If you think about it, it is still pretty much the same today.

A lot of times I can spot another hiker or backpacker with little effort. It could be that they have a certain kind of backpack. Or that they are wearing well-worn boots.

It might be that they have certain park stickers on their car.

It’s a natural part of human dress and cultural identity. I mean, the trend even has a scientific name!

First, a disclaimer: This is my theory, based on my recent research. “Theory” means that I’m giving this my best guess considering everything I have learned.

So why do hiking boots have red laces?

My best guess is that early manufacturers put red laces on their boots to distinguish them as “hiking boots” rather than work boots. Boots pretty much looked the same back then and it could have been a way to market them as being different and, somehow, better.

This may have been justified by saying that the red laces were more visible, or easier to find in the dark, as some folks have theorized.

But at some point, it became standard for hiking boot manufacturers to sell their boots with red laces.

As specialized companies started making boots special for hiking, the red laces became the standard of hiking fashion in the ’60s, ’70s and ’80s. It was a rare pair of boots that didn’t have red laces back then.

My theory is this…

As the hiking boot industry grew, and hiking culture grew with it, having red laces became part of the “uniform” for hikers.

Maybe red laces were not quite a status symbol, but a signal that your boots were not made just for walking or working, but that you were a hiker.

Over a few decades, red laces became part of the hiking culture.

That is why, even now, hiking boots are often sold with red laces. And if your new boots do not come with red laces, you can buy them and switch them out.

So There You Have It…

I guess a theory is better than nothing, right?

It would be quite a project to get in touch with the first hiking boot manufacturers and see if they have documented anywhere in their company histories why they chose red laces for their boots.

I challenge the hiking community to delve deeper into this question to see if we can clear up this mystery once and for all!

What is Mountain Hiking?

What is Mountain Hiking?

How Do You Prevent Blisters When Hiking?

What is the Best Food To Take on...

What Are Nordic Walking Sticks?

Is It Safe To Go Hiking Alone? Plus...

After reading your article I think I came up with a theory about why red is the color of choice. Many years ago the “safety” color required to be worn by hunters was actually red before it was orange. Turns out there’s a lot of red in nature so it didn’t work very well as a safety measure. One interesting detail about why I think the laces are a connection: the rule is one single part of your wardrobe requires the designated safety color. Hunters in particular don’t like sticking out in nature because well..they’re hunting! Typically they wear something small like a hat or.. laces! Continuing the theory.. I would guess two options. Firstly, hiking boots were marketed to hunters first and then hikers purchased them. Or secondly, hiking boot manufactures were trying to prioritize the safety of their customers. Let me know your thoughts!